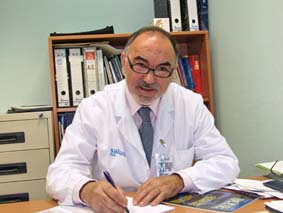 b. 23 August 1946, Cogolludo, Spain.. M. María Soledad Vicente, 5 October 1971, 2 sons, 1 daughter. Education: Degree in Medicine and Surgery, Medical Faculty Zaragoza (Spain), 1970; Certified in Puericulture, 1975; Certified in Medicine of the Work,1976; Resident in Rehabilitation and Physical Medicine Specialist, University Hospital Miguel Servet, 1974-77; Doctor in Medicine and Surgery, 1991; Appointments: General  Physician and General Health Management in cities in Autonomous Communities(regions) of Guadalajara, Aragon and Catalonia, Spain, 1970-73 (important contribution to the fight against the bud of illness (000) Cholera in Aragon of the  year 1971( Jalón River) (Ref: Gen.Reg.Sanity 8639); Emergency  in Medicine Officer in the Royal and Provincial Hospital Ntra Sra de Gracia”, Zaragoza, Spain, 1973-1988; Specialist, Rehabilitation Department, Chief of Unit of Phoniatry and Logotherapy 1977-2013) , and  Chief  of Service of Medicine Physical and Rehabilitation 2004 -2013) of the  University Hospital Miguel Servet, Saragossa (Spain),  ; Vicarial-Consultant of the Company Derfonia S.L., from 1997; and Chairman President of  “Centro de Foniatria y Logoterapia”; Specialist in Rehabilitation of Cerebral Palsy Centre, ASPACE–Aragon, 1980-1992. Lecturer on medical rehabilitation, phoniatry and the handicapped at scientific sessions and congresses. Lecturer tutor MIR of Rehabilitation in the University Hospital Miguel Servet, of Zaragoza, from December1992 until January of 2003. Coordinator of the team of Improvement of Assistance Quality of the Department of Rehabilitation of the University Hospital Miguel Servet from January of 2003-. Chief of Service of Physical Medicine and Rehabilitation of the University Hospital Miguel Servet (Saragossa-Spain). 2004-Publications: Chapters of books and articles in professional journals on human communication disorders (language, speech, voice and hearing); book: Doctoral tesis (Zaragoza,1991), Result of an investigation after 17 years of clinical work with aphasic patient , “Capacidad de comunicación verbal en el paciente afásico, correlación clínico foniátrica y psicosocial” (“cum laude”) (Ref: 1ªEd.IBSN 84-773260-6). Editor, Founding Manager and Director of magazine “Revista Española  de Foniatria” (1987-1992);  Honours Include:  Reward Fami - Aragon (1997) (Collective in the mark of the Dep. of ORL of the University Hospital Miguel Servet); Reward "Aragonese of the Year" in Sciences and Investigation, as member of the Team of Surgery of the Parkinson, June 13 2002.  Reward as Member of the Team Emerity of it Implants Coclear, recognition of the illustrate Official School of Doctors, Zaragoza, November of 2002. Concession of the maximum reward of Azov Academy of Economic Sciences and of the Activity of the Enterprise the Medal the Gotey and Cafa, Sacred Ignatius  (TANAIS Reg, Mariupol, Ukraine, 2003). Research: About speech, language and voice disorders. Member of investigation teams on the one implants coclear; the surgery in the illness of Parkinson; the surgery in the Epilepsy, and the alterations of the dream for snore (ADS), Memberships: Chairman, Spanish Medical Society of Phoniatry (SOMEF),1992-1997; Chairman, Filial society of Phoniatry of the Spanish Society of Rehabilitation and Physical Medicine (SERMEF) 1998-; Vice-Chairman of the Spanish Medical Society of Phoniatry (SOMEF,1989-1991). Aragonese Society of Otorinolaryngology; Aragón Society of Rehabilitation and Physical Medicine; Spanish Society of Medical-Surgical Laser;  Member of the Spanish Society of Rehabilitation (1976)  Member Founder of the Spanish Medical Society of Phoniatry (SOMEF) (1982).  Delegate of the Spanish Medical Society of  Phoniatry (SOMEF) in Aragon,1987-, Member of the European Union of  Phoniatricians.  Member of Board of the European Union of  Phoniatricians in 1988. Director of the Spanish Magazine of Phoniatry (Revista Española de Foniatria) (1986 at 1992) and from 1993 at 1997 responsible for their edition and distribution.  Chairman of the Filial Society of Phoniatry of the Spanish Society of Rehabilitation and Physical Medicine (SERMEF) (1998-).  Member of the Council of Writing of the Magazine Rehabilitation, from 1988 until July of 2000. Member of the Committee (1999) of the Spanish version of the French Medical Surgical Encyclopedia for the area of Rehabilitation.  Member founder of the Aragonese Society of Rehabilitation and Physical Medicine. Member numerous investigative an clinic commissions  in the environment of the hospital medicine; Registered in International Biographical Centre of Cambridge (1999-); and  Who´s Who in the World (1998-), Who´s Who in Medicine and Healthcare (1999-), Member of the  International Biographical Association of  IBC, Cambridge (in procedure).  Collaborative Associate, NGO,s and humanitarian associations. First Vice Chairman of Civil International Committee (CIC) (http://www.cic-wsc.org )  and Chairman of Civil International Committee (CIC) (2006 -2017) ; Actualy Honorary Chairman "on preparation World public opinion to execution of First World Congress of Spiritual Unification in New York (April, 2003). Webmaker Webpage CIC. Honorary Appointment to Research Board of Advisors of the American Biographical Institute (2004).